In Marathi, the language widely spoken in the state of Maharashtra in India; Bharada is an adjective that means ‘coarse’ or ‘coarse ground’. It is also synonymous with coarse ground chick pea flour (besan in Hindi) which is the primary ingredient in this dish. A Bharada dish is a  slow stir fry of a vegetable with coarsely ground chick pea flour and spices. Chick pea flour has a wonderful and nutty flavor when it is prepared this way and is a pleasure to enjoy with warm rotis or chapatis spread with ghee. A coarse ground chick pea  flour is traditional in this dish, but I have also eaten bharadas that use finely ground chick pea flour; with equally good outcomes. A variety of vegetables is suitable for combining with chick pea flour in this dish – thin cut green beans, sliced green bell peppers, chopped spinach, chopped cilantro, potatoes, among the popular items. Zucchini joins that list even though it is not commonly found in India. I suppose the use of zucchini in bharada became popular as Indian cooks wondered what to do with the abundance of zucchini squash in western grocery stores during summer.

A bit of sideways information. Maharashtra is the land of Bollywood. Yes, that land where dreams are woven on silver screens that mesmerize the masses of India. If you haven’t watched any Bollywood movies ever, you must make it a point to experience movie drama like you have never experienced it before. I think its there somewhere in the list of ‘100 things to do before you die’.

Back to our dish. I did not have coarse ground chick pea flour on hand, so am using the fine ground chick pea flour. Zucchini is diced and combined with chick pea flour, salt, turmeric, red chili powder, some asafetida, coriander and cumin seed powders. The mixture is allowed to sit for an hour or so, or until the salt draws out the moisture from the zucchini. That moisture is enough to make a light, almost tempura like batter on each zucchini cube. As you slowly stir fry the zucchini cubes, some of that light batter crisps up on the zucchini, some falls off. In the end you have a combination of textures – soft vegetable and crisps of spiced chick pea flour. Its a lovely concept. The dish is best eaten with a roti or chapati, while still hot and crispy. 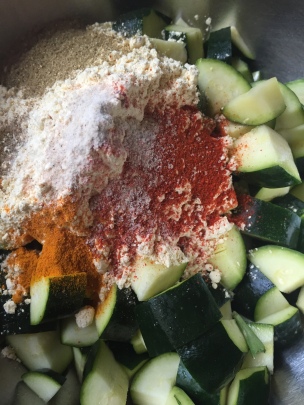 2 thoughts on “Bharada with Zucchini”