Until now, my relationship with waffles has been restricted to store-bought frozen waffles or large Belgian waffles served at breakfast buffets which look quite tasty but sadly taste pasty. All that recently changed with my newly acquired waffle maker. I never realized home-made and ‘real’ waffles with their crisp on the outside, chewy on the inside texture would bowl me over so effortlessly. The first batch of waffles I made were simple plain vanilla waffles. Topped with some whipped cream and sliced strawberries they tasted delectable. I wanted something savory next but couldn’t think of anything right away. Then I when I went to the farmer’s market on Saturday morning, and saw some lovely corn, it hit me.

Corn combined with roasted peppers is one of my favorite combinations. Growing up, my Dad used to make a dish with sweet bell peppers stuffed with corn, green chillies, cumin seeds and coconut. That merging of flavors has always stayed with me and in addition to making the dish my Dad made, I also find different ways to combine corn and green chillies or jalapeno peppers. Sometimes it is just roasted corn kernels with chopped jalapeno peppers, fresh cilantro, a sprinkling of lime juice and a pinch of kala namak or Indian black salt that hits the spot. Some other times, I use a mixture of masa, roasted corn kernels, roasted poblano peppers and pepper jack cheese to make vegetarian tamales.

I picked up the corn, and then some good-looking anaheim peppers. In retrospect, I should have selected a poblano pepper instead. The anaheim peppers were a bit too mild and next time I will use a poblano pepper instead. The waffles made with the anaheim peppers were tasty but a poblano would have elevated the spiciness and balanced the sweetness of the corn. This recipe is based on the vanilla waffle recipe. I adjusted the amount of flour to account for the added corn and corn meal. Of course, some seasonings which complement corn like cumin powder, paprika went in too.

To prepare the corn for this recipe, I first removed the outer husk and placed the corn cob directly on an open gas flame set to medium. Using tongs, I turned the cob over until it was even roasted. I placed the roasted corn on a cutting board, and using a sharp knife, cut away at the cob and collected those roasted kernels. To roast the anaheim pepper, I did the same as for the corn, until the pepper was nicely blistered. Using a sharp knife, I carefully removed the burnt skin off the pepper and then diced it fine. Keeping the seeds or not is a personal preference, and in my case I collected the seeds as well. If you don’t have a gas burner in your kitchen, use a nice hot cast iron pan to roast individual corn kernels (no oil or butter). When you are done with the corn kernels, place the pepper on the hot cast iron pan and turn it regularly with your tongs until the skin is blackened and blistered. Alternately, you can roast the corn and peppers on your barbecue grill or under your oven’s broiler.

I was pleasantly surprised by how well these waffles turned out. The corn meal and butter made the exterior crisp while the corn helped keep the interior texture nice and soft. I served them with a fresh guacamole, tangy with lime juice and spicy with finely chopped jalapenos. If you have a sweet tooth, you could also try whipping some butter with honey and cumin and serving the waffles with a generous pat of that butter on top. 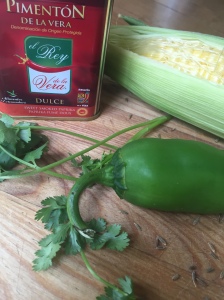 © BLISS, THIS FOOD [2016]. Unauthorized use and/or duplication of this material without express and written permission from this site’s author and/or owner is strictly prohibited. Excerpts and links may be used, provided that full and clear credit is given to BlissFull and BLISS, THIS FOOD with appropriate and specific direction to the original content.
%d bloggers like this: