Leek and potato soup is one of those comfort foods that warm your soul on a cold autumn night. Rich and creamy, tangy and potato-ey, you will be going back to the soup pot for multiple servings. This soup is of disputed origin – both the French and Welsh claim it as their own. What is undisputed is that you can enjoy it oblivious to its origin. 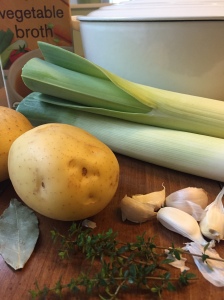 Leeks are delightful relatives of onions and garlic, and so belong to the allium family of vegetables. They are highly nutritious and support cardiovascular health due to the presence of the flavonoid kaempferol which has been shown to help protect the linings of blood vessels. They also contain a good amount of folate and antioxidants. Most importantly, they taste delicious.

Before you use leeks, wash them thoroughly. Leeks are notorious for harboring grit between their lovely whorls of pale green leaves. The best way to get rid of the grit is to cut through the entire length of the leek. Slice off the root end and place each half under running water to rinse off the grit between the leaves. Be sure to take your time for this step. This soup is meant to be smooth, not gritty.

The other main ingredient is potatoes. Traditional recipes call for russet potatoes, but since I did not have them on hand I used white potatoes to equally good results.  Purists will insist that you extract the potato cubes once they have cooked in the soup, and pass them through a ricer to get fluffy potatoes. The rest of the leek mixture is pureed separated and then combined with the riced potatoes. The belief is that ricing potatoes will help avoid a glutinous texture and yield a soup that is more light. I can be fastidious at times but today was weeknight dinner and I just blended the entire mixture (after removing the herbiage – bay leaves and thyme sprigs). In my opinion, blending is totally acceptable and yields results that are as delicious.

Traditional leek and potato soup uses buttermilk for tang and a generous amount of fresh cream for richness. In the interest of a slimmer waistline, I have almost entirely eliminated the cream in my recipe; with the exception of a drizzle before serving. I can attest for the deliciousness of this soup even without all that cream. 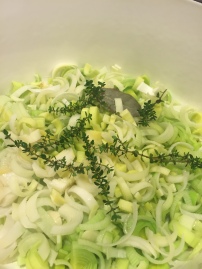 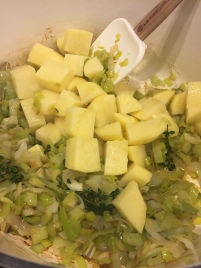