If you did not know a dish called Shakshuka and I told you I had it for dinner tonight, you might think I am pulling your leg. Shak-shak-shakshuka. Its an odd sounding name that auto-correct on my document editor will not pick up. But, once you’ve eaten it, Shakshuka is a delicious egg dish that you will want to make over and over again and will easily become a household name in your home. In addition to taste, Shakshuka deserves bonus points because it is simple to make and is a great idea for weeknight dinner. Buy a baguette or any bread you like and serve it alongside the Shakshuka. You can use it to mop up any sauce that is left over on your plate and save yourself the embarrassment of licking the plate. I told you, this is a delicious dish.

Shakshuka is a popular Israeli dish that spread to many parts of North Africa. It consists of a zesty tomato based sauce that eggs are gently poached in. Most traditional Shakshuka recipes don’t call for cheese, but I use grated sharp cheddar cheese in my version. When you taste a forkful of egg, cheese and zesty tomato sauce, you will agree that cheese has to be part of the party. My version here is an adaptation of a recipe that I found on the New York Times.

The ingredients for this recipe are simple. In my opinion, the distinctive flavor in this dish comes from the use of cumin powder. If your tastebuds are fastidious, use a spice grinder to grind up about two teaspoons of cumin seeds. You really need a teaspoon of cumin powder for this dish but keep in mind some of that stuff gets lost in crevices of the spice grinder, so its a safer bet to start with two teaspoons. Pre-ground cumin powder bought from the supermarket is ok too, as long as it hasn’t been in your pantry for ages.

Another important contributor to taste is the type of tomatoes you use. Even though you might be tempted to use fresh tomatoes, especially in the summer months, the best taste is from canned tomatoes. I prefer San Marzano tomatoes; specifically a brand called Cento. San Marzano tomatoes have a nice balance of sweetness and tartness that greatly enhances the flavor of any dish. I usually buy canned whole tomatoes and chop them up before using them. 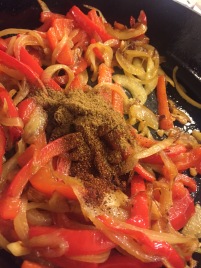 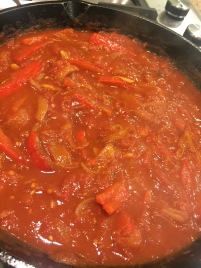 I usually cook Shakshuka in my 12″ cast iron pan. Cast iron pans do a great job of conducting and maintaining heat so you are not trying to play too much with the adjustments on the stove. 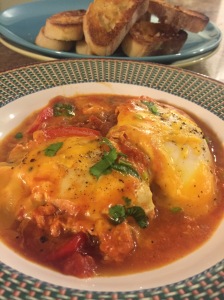